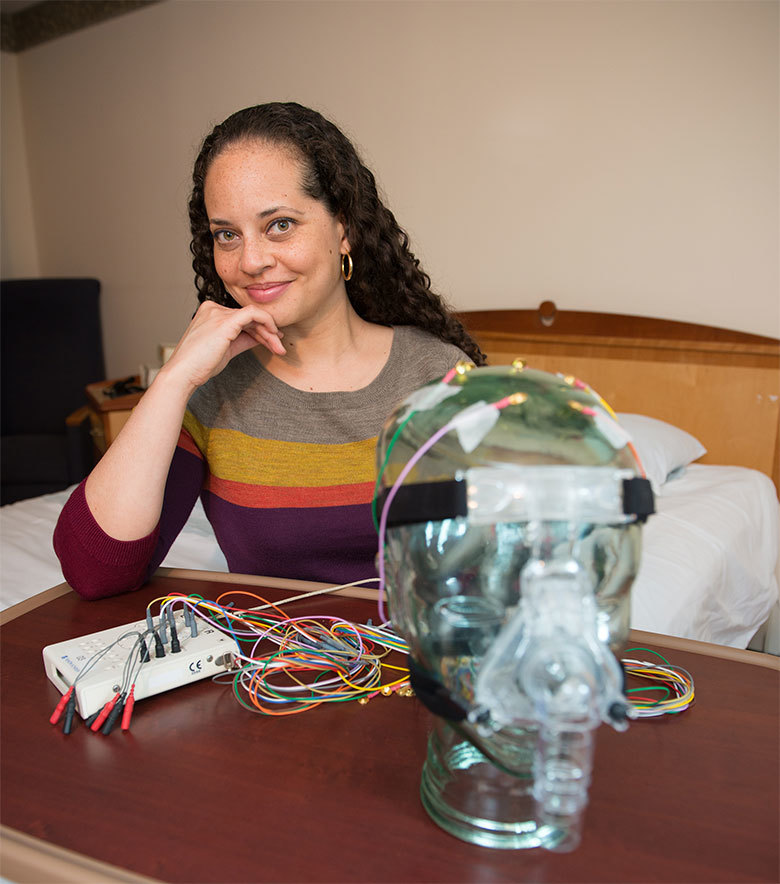 "During college I started taking psychology and neuroscience classes so I could better understand the brain and behaviors of those children, and it kind of went from there."

Erin Hanlon '95 always knew she'd be a teacher – she just imagined her students would be a bit younger.

"I've wanted to be a teacher since I was a small child," she said. "I had envisioned being a kindergarten or grade school teacher, so my current career path is somewhat different than what I thought it might be."

Today, Hanlon, a neuroscientist, is a research associate/assistant professor at the University of Chicago in the Department of Medicine and the Sleep, Metabolism and Health Center. She received her B.S. from Duke University and her Ph.D. from the University of Wisconsin, Madison. She studies and lectures on behavior, brain chemistry and physiology, and their impact on health with a focus on sleep science – especially sleep deprivation and how it affects metabolic function.

Hanlon's passion for understanding the brain dates back to her time at Latin, where she developed an interest in working with children who have special needs. "During college I started taking psychology and neuroscience classes so I could better understand the brain and behaviors of those children, and it kind of went from there. I just kept taking those classes and realized that I wanted to continue to learn about it... for as long as possible. So it became my career."

These days Hanlon spends most of her time in her office, analyzing data and writing journal articles and grant applications. She also oversees overnight sleep studies during which she gathers information for her research. In the next five years, she hopes to be in a tenure-track position preferably close to family and friends in Chicago.

Hanlon credits the academic and intellectual training she received at Latin for preparing her for what was ahead. "Latin taught me from a young age how to be organized, think critically and manage a rigorous academic load. It most definitely prepared me for college at Duke," she said, recalling a speaker at freshman orientation who asked if anyone in the audience had read a particular Faulkner book. (Hanlon can't remember which book.) "I was one of a few people who had, thanks to the Faulkner class I took with Mr. Spruance."

She says similar experiences throughout college and graduate school made her confident in her choice of a future in academia. She expresses appreciation for teachers like Latin and classics teacher Gregg Hoffenkamp, science teacher Chinh Nguyen, and especially her third grade teacher, Patricia Peterson, all of whom nurtured her and encouraged her intellectual interests during her time at Latin.