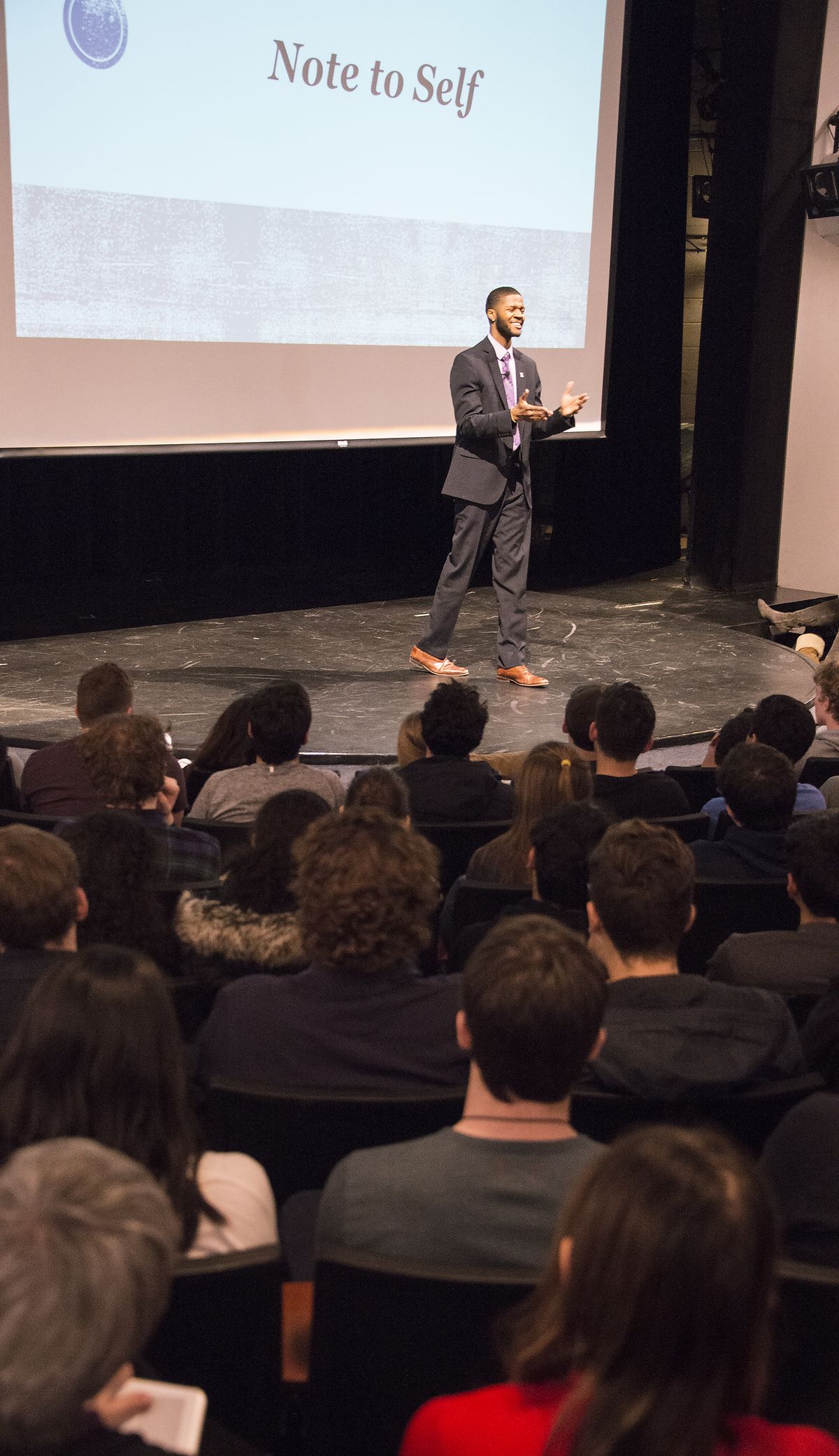 Through his poetry and his incredibly meaningful and impactful speech, Livingston told his story of how he found his voice and a space where he felt confident and was valued. Performing "Note to Self," "Jus Like Yo Momma" and "Still Moving," his goal was for the audience to leave Wrigley Theatre feeling hopeful. Livingston spoke to upper and middle school students as well as Latin fourth graders, plus 70 students from Catherine Cook school.

As part of our MLK Day celebration, middle and upper school students, faculty and staff honored the life of Dr. Martin Luther King, Jr. with a day of workshops around our theme of "Courageous Leadership: Becoming Agents of Change."

In US, students were able to choose from over 30 workshops during the three sessions. Some of the workshop leaders included Jason Coleman, from Project Syncere, who spoke about his career path from designing mobile phones to becoming a leader in the STEM education sector working with students from underrepresented backgrounds; as well as Rich Alapack, from we all live here, who talked about how he got started with his project spreading positivity and inclusivity around the city of Chicago using public art. Students in MS and US also started working on ideas for a public art piece that will be displayed at Latin. Alapack will return to Latin to work with our students later in the year.

Another workshop for US students was given by Beatriz Frausto-Sandoval, a long-time immigration attorney working to keep families together in the US, who discussed how she came be a leader in her community and how that sense of duty has led her to run for the 14th sub circuit court. Students also attended the session "Women of Color in the Arts: It's a Matter of Representation Because our Representation MATTERS" lead by Fawzia Mirza, an actor, writer and producer who uses performance, personal storytelling and comedy to break down stereotypes across a multiplicity of identities: race, religion, sexual orientation, gender and defy the concept of the "model minority."

Latin alums lead sessions, including Rendel Solomon '96 who spoke about his family's journey and how that inspired him to create his non-profit, One Stock, One Future, turning one million underserved youth into public company shareholders, Virgil Williams '88, Oscar-nominated screenwriter for the film Mudbound, who talked about how his racial/ethnic identity and experience in Chicago inspired his vision for the film, and Linda Xóchitl Tortolero '96, President & CEO of Mujeres Latinas en Accion, who discussed her role and responsibility working with Latina women in Chicago.

In addition, students from the Student Diversity & Equity Committee (SDEC) and those who attended Student Diversity Leadership Conference (SDLC) sponsored three workshops: "The Evolution of Chicago's Neighborhoods," "How to Be an Upstander" and "Intersectionality: How Different Aspects of Our Identity Intersect." Members from Young Chicago Authors and the Anti-Defamation League facilitated workshops in both the middle and upper schools. US faculty also ran workshops, including "True Revolution of Values", "The Art of Protest" and "Making Your Voice Visible."

In MS, students were able to participate in two workshops. Faculty-sponsored workshops included: "Rosa Parks Wasn't Tired," "FROM DIS TO MISS: The Story of Mary Hamilton and Other Forgotten Women who Resist," "Code Switching," "Spanglish and Language Power Dynamics" as well as a trip to the Chicago History Museum to view and debrief the MLK photo exhibit. Students also worked with outside presenters who looked at "Race, Representation and Identity in Comics." One of the biggest themes was how to use your voice for good, how to be an upstander.

Lower school students learned about peace from artist and nonviolence educator, Indira Freitas. Her presentation of "The Power of One" emphasized peace as a verb and that peace requires action resonated with all of us. Fourth graders were joined by our friends at Courtenay Elementary school to create peace footprints. Our "We Walk Together" banner is now hanging in the lower school.