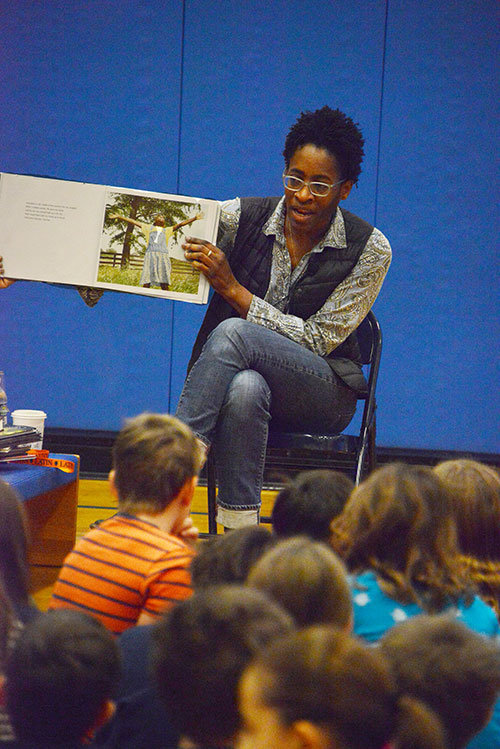 2016 Martin Luther King Speaker
February 11, 2016
During the weeks surrounding Martin Luther King Jr. Day all segments of the Latin community reflected on his teachings and words. Whether through books, discussions, activities or community engagement efforts, students in JK - 12, their teachers and their families, were part of the school wide conversation.

This year, Latin welcomed award-winning author Jacqueline Woodson to share her perspective on Dr. King's legacy. Woodson, a prolific writer who has penned more than two dozen books for young readers and is a 2014 National Book Award winner for her New York Times bestselling memoir, Brown Girl Dreaming, has won critical acclaim and numerous literary awards for stories that deal with empathy, difference and equity.

During her visits with parents, alumni and lower, middle and upper school students, Woodson talked about being a writer of color, her art and her inspirations. At the upper school assembly, Woodson began by sharing a story about a conversation she had with a teacher at a conference:

"She told me: 'I don't know your work because I don't have any black children in my class,'" recalled Woodson, expressing her astonishment that a teacher would not understand the importance of "windows and mirrors" in youth literature. Readers need to be able to see both reflections of themselves and others in books so that they can empathize with experiences that are different from their own, she said. Woodson urged her audiences to always be active listeners as this cultivates empathy and inspires change.

Woodson explained that her desire to be an active listener is at the root of her art. "I had a lot of questions I wanted to ask and writing allowed me to do that," she said. Throughout her presentations, she recited passages from her work, which ranges from early-reader picture books to young adult and adult novels.

Even now, decades into her career, Woodson said she still has questions. Responding to a student who asked what she would want to ask Martin Luther King if he were alive today, Woodson said: "What now?" She said the current climate of rage and intolerance makes her wonder how efforts for equity and justice can move forward.

"You are the ones who can create change," Woodson told the upper schoolers. "Think about what kind of change you want to see in the world and how you are going to go about making that change."

The Ripple Effect in the LS
In the week leading up to Woodson's visit, all lower school students read (or were read to from) the author's award-winning book Each Kindness, which talks about the choices children can make about how they treat someone who is new or different and the impact those choices can have.

In a special class in the middle and upper school library led by Head of School Randall Dunn and Lower School Director Julie Brooks, the fourth graders used the social justice vocabulary they had been learning to analyze Each Kindness. Other grades looked at the book in a variety of ways and had discussions facilitated by their teachers.

The lessons of Each Kindness and the power of the ripple effect also permeated this year's lower school MLK Assembly. As is tradition in the lower school, the assembly opened with a Silent Peace March, followed by faculty and student presentations about social justice and the Civil Rights movement, the recitation of Dr. King's "I Have a Dream" speech, and the Unity Chant. Inspired by Each Kindness, the assembly concluded with the sharing of students' personal stories and upstander moments that had been gathered in a "Kindness Jar."

Families assembled toiletry bags, hauled food and supplies back and forth to the soup kitchen, prepared and served dinner, and most important of all, made guests in need feel welcome.

Thank you to everyone who brought in the much-needed toiletry supplies and those who helped during the holiday.
The next day, the spirit of community engagement continued as upper school students partnered with their buddies in the middle and lower schools for the morning. The fourth and ninth grade students paired to volunteer at Cornerstone Shelter and the Greater Chicago Food Depository, while other buddy groups worked together to spread cheer and messages of gratitude throughout the lower, middle and upper schools.
Share to FacebookShare to TwitterShare to Google+Share to LinkedInShare to PinterestShare to EmailPrint this page
Back to News
There are no news posts to display
Powered by Finalsite