Latin School of Chicago provides its students with a rigorous and innovative educational program in a community that embraces diversity of people, cultures and ideas. Latin inspires its students to pursue their passions and lead lives of purpose and excellence.

Latin School achieves its mission by: 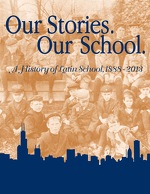 Latin is one of the oldest independent schools in the city of Chicago. Latin School was formed in 1888 when a group of parents in Chicago enlisted Mabel Slade Vickery, a teacher from the East Coast to take charge of a new, parent-owned school. The first class consisted of 10 boys approximately 10 years old.

The school was designed to provide students with a rigorous college-preparatory education in the classical tradition, with a curriculum that was heavily influenced by Classical studies and the study of the Greek and Latin languages, hence the name “Latin School." Read more about Latin's history in the 125th Anniversary edition of Latin Magazine.

Latin language is still taught in the middle and upper schools today.

Miss Vickery was 34 years old when she arrived in Chicago to head the parent-owned school for boys that later became the Chicago Latin School in 1888. From the beginning, Miss Vickery was strongly committed to the success of the new school. In 1894, when parent sponsorship became uncertain, Miss Vickery took ownership of the school and grew its enrollment, determined to make it financially solvent.

Although small in stature, Miss Vickery exuded an aura of dignity. She always wore a hat in the classroom and had excellent posture. The portrait of Miss Vickery by famed London artist Frank O. Salisbury that hangs in the school today was criticized for making her look taller than she was. In fact, this was purposeful, according to Josephine Wilkins, former student and long-time friend. “[It] was done to emphasize her innate dignity,” Wilkins later wrote.

In the classroom, Miss Vickery was described as a strict but gentle disciplinarian. Her favorite subject was ancient history which she taught in the upper school. Miss Vickery held strong beliefs about education and the well-being of her students.

On her retirement in 1929, Miss Vickery donated $5,000 to establish the girls school’s first library. When the schools merged in 1953, the Mabel Slade Vickery Library moved to the 1531 N. Dearborn building, where it resides today.